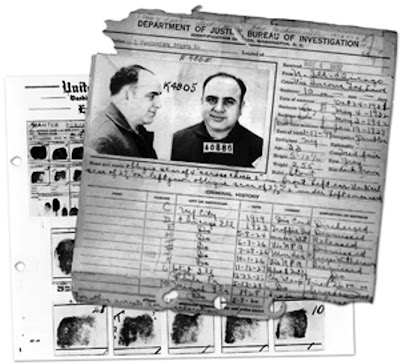 ext and Photo Courtesy of the FBI


Born in Brooklyn, New York, in 1899, of an immigrant family, Al Capone quit school after the sixth grade and associated with a notorious street gang, becoming accepted as a member. Johnny Torrio was the street gang leader and among the other members was Lucky Luciano, who would later attain his own notoriety.

About 1920, at Torrio's invitation, Capone joined Torrio in Chicago where he had become an influential lieutenant in the Colosimo mob. The rackets spawned by enactment of the Prohibition Amendment, illegal brewing, distilling and distribution of beer and liquor, were viewed as "growth industries." Torrio, abetted by Al Capone, intended to take full advantage of opportunities. The mobs also developed interests in legitimate businesses, in the cleaning and dyeing field, and cultivated influence with receptive public officials, labor unions and employees' associations.

Torrio soon succeeded to full leadership of the gang with the violent demise of Big Jim Colosimo, and Capone gained experience and expertise as his strong right arm.

In 1925, Capone became boss when Torrio, seriously wounded in an assassination attempt, surrendered control and retired to Brooklyn. Capone had built a fearsome reputation in the ruthless gang rivalries of the period, struggling to acquire and retain "racketeering rights" to several areas of Chicago. That reputation grew as rival gangs were eliminated or nullified, and the suburb of Cicero became, in effect, a fiefdom of the Capone mob.

Perhaps the St. Valentine's Day Massacre on February 14, 1929, might be regarded as the culminating violence of the Chicago gang era, as seven members or associates of the "Bugs" Moran mob were machine-gunned against a garage wall by rivals posing as police. The massacre was generally ascribed to the Capone mob, although Al himself was then in Florida.
The investigative jurisdiction of the Bureau of Investigation during the 1920s and early 1930s was more limited than it is now, and the gang warfare and depredations of the period were not within the Bureau's investigative authority. 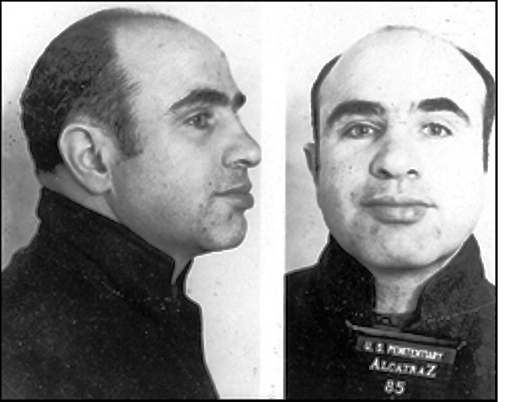 The Bureau's investigation of Al Capone arose from his reluctance to appear before a Federal Grand Jury on March 12, 1929, in response to a subpoena. On March 11, his lawyers formally filed for postponement of his appearance, submitting a physician's affidavit dated March 5, which attested that Capone, in Miami, had been suffering from bronchial pneumonia, had been confined to bed from January 13 to February 23, and that it would be dangerous to Capone's health to travel to Chicago. His appearance date before the grand jury was re-set for March 20.
On request of the U.S. Attorney's Office, Bureau of Investigation Agents obtained statements to the effect that Capone had attended race tracks in the Miami area, that he had made a plane trip to Bimini and a cruise to Nassau, and that he had been interviewed at the office of the Dade County Solicitor, and that he had appeared in good health on each of those occasions.
Capone appeared before the Federal Grand Jury at Chicago on March 20, 1929, and completed his testimony on March 27. As he left the courtroom, he was arrested by Agents for Contempt of Court, an offense for which the penalty could be one year and a $1,000 fine. He posted $5,000 bond and was released.

On May 17, 1929, Al Capone and his bodyguard were arrested in Philadelphia for carrying concealed deadly weapons. Within 16 hours they had been sentenced to terms of one year each. Capone served his time and was released in nine months for good behavior on March 17, 1930.

On February 28, 1936, Capone was found guilty in Federal Court on the Contempt of Court charge and was sentenced to six months in Cook County Jail. His appeal on that charge was subsequently dismissed.

On June 16, 1931, Al Capone pled guilty to tax evasion and prohibition charges. He then boasted to the press that he had struck a deal for a two-and-one-half year sentence, but the presiding judge informed him he, the judge, was not bound by any deal. Capone then changed his plea to not guilty.

On October 18, 1931, Capone was convicted after trial, and on November 24, was sentenced to eleven years in Federal prison, fined $50,000 and charged $7,692 for court costs, in addition to $215,000 plus interest due on back taxes. The six-month Contempt of Court sentence was to be served concurrently.

While awaiting the results of appeals, Capone was confined to the Cook County Jail. Upon denial of appeals, he entered the U.S. Penitentiary at Atlanta, serving his sentence there and at Alcatraz.

On November 16, 1939, Al Capone was released after having served seven years, six months and fifteen days, and having paid all fines and back taxes.

Suffering from paresis derived from syphilis, he had deteriorated greatly during his confinement. Immediately on release he entered a Baltimore hospital for brain treatment, and then went on to his Florida home, an estate on Palm Island in Biscayne Bay near Miami, which he had purchased in 1928.

Following his release, he never publicly returned to Chicago. He had become mentally incapable of returning to gangland politics. In 1946, his physician and a Baltimore psychiatrist, after examination, both concluded Al Capone then had the mentality of a 12-year-old child. Capone resided on Palm Island with his wife and immediate family, in a secluded atmosphere, until his death due to a stroke and pneumonia on January 25, 1947.

How the Law Finally Caught Up With Al Capone 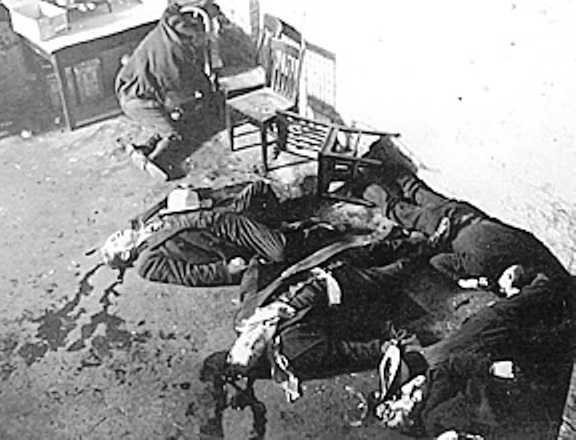 In the “roaring twenties,” he ruled an empire of crime in the Windy City: gambling, prostitution, bootlegging, bribery, narcotics trafficking, robbery, “protection” rackets, and murder. And it seemed that law enforcement couldn’t touch him.

The early Bureau would have been happy to join the fight to take Capone down. But we needed a federal crime to hang our case on—and the evidence to back it up.

In those days, racketeering laws weren’t what they are today. We didn’t have jurisdiction over prohibition violations; that fell to the Bureau of Prohibition. Even when it was widely rumored that Capone had ordered the brutal murders of seven gangland rivals in the infamous “St. Valentine’s Day Massacre,” we couldn’t get involved. Why? The killings weren't a federal offense.

On February 27, Capone was subpoenaed at his winter home near Miami, Florida, to appear as a witness before a federal grand jury in Chicago on March 12 for a case involving a violation of prohibition laws.

Capone said he couldn't make it. His excuse? He claimed he’d been laid up with broncho-pneumonia for six weeks and was in no shape to travel.

That’s when we got involved. We were asked by U.S. Attorneys to find out whether Capone was on the level. Our agents went to Florida and quickly found that Capone’s story didn’t hold water. When he was supposedly bedridden, Capone was out and about—going to the race tracks, taking trips to the Bahamas, even being questioned by local prosecutors. And by all accounts, his health was just fine.

On March 27—76 years ago Sunday—Capone was cited for contempt of court in Chicago and arrested in Florida. He was released on bond, but from there on, it was downhill for the notorious gangster:

Less than two months later, Capone was arrested in Philadelphia by local police for carrying concealed weapons and was sent to jail for a year.

When he was released in 1931, Capone was tried and convicted for the original contempt of court charge. A federal judge sentenced him to six months in prison.

In the meantime, federal Treasury agents had been gathering evidence that Capone had failed to pay his income taxes. Capone was convicted, and on October 24, 1931, was sentenced to 11 years in prison. When he finally got out of Alcatraz, Capone was too sick to carry on his life of crime. He died in 1947.

In the end, it took a team of federal, state, and local authorities to end Capone’s reign as underworld boss. Precisely the kind of partnerships that are needed today as well to defeat dangerous criminals and terrorists. 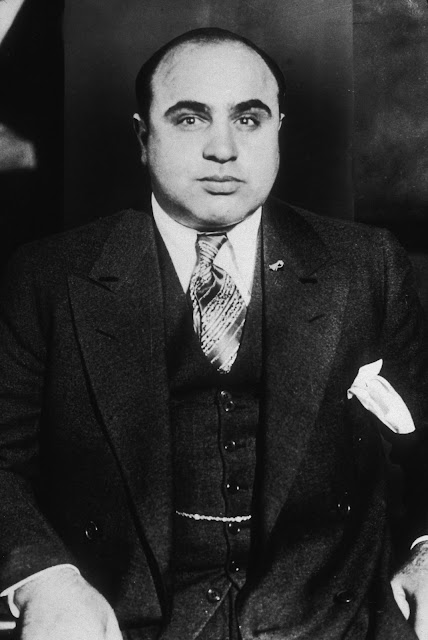 Al Capone was a notorious gangster who conducted his illegal enterprises in Chicago, Illinois, during the 1920's. In 1929, the FBI was ordered by the Attorney General to investigate the legitimacy of an affidavit that petitioned for a postponement of Capone's appearance in response to a Federal Grand Jury subpoena. The investigation established that facts within the affidavit were indeed false. Capone was tried and convicted of contempt of court on February 25, 1931. When Capone was convicted for income tax evasion, the Judge ruled that the sentence for contempt of court should be served concurrently with the tax evasion sentence. -- Text and links below Courtesy of the FBI - Freedom of Information Act

No Taxation Without Representation

US Bill of Rights

*Republican Party - - is a defunct political party organized by Thomas Jefferson and James Madison in 1791. The Party went out of existence over the schism between John Quincy Adams and Andrew Jackson (both Republican candidates) over the Presidential election of 1824. Today, for the sake of expediency, political scientists incorrectly refer to it as the Democratic-Republican Party. Party members throughout its existence never utilized the name “Democratic-Republican.”

*** President of the Confederate States of America